Japan · About Culture & History
In Japan, it’s called the ‘Castle in the Sky’, but international travelers who’ve discovered historic Takeda Castle have compared it to another mountain-top historic ruin half a world away in South America.
Peru’s Machu Picchu has made most intrepid travelers’ bucket lists of adventures. But Japan’s Takeda Castle (pronounced: ‘tah-kay-dah’) - that's about the same age as Peru's Machu Picchu - remains an other-worldly experience unknown to most overseas travelers. That's especially surprising considering it’s in the district next door to the ancient capital city of Kyoto, which is a must-do stop for nearly every visitor to Japan.
It’s worth the detour to the mountains of Hyogo Prefecture. Visitors make pre-dawn ascents to viewpoints on the mountain opposite just to gaze over upon the wonder of Takeda Castle at sunrise, appearing to float on top of what the Japanese call ‘unkai’ or ‘a sea of clouds’ - triggered by early morning fog.
Takeda Castle was built in the 1400’s as a defensive military position – easy to imagine with its sweeping views over the region. Following a pivotal battle during the push to unify Japan, its final lord committed ritual suicide, and the castle was abandoned in the early 17th century.
After that, the castle remained almost-forgotten on the mountain top, and as life moved forward into the 20th century, the buildings fell, and the site settled into ruins of its stone foundations, with walls and ramparts remaining. Those were restored in the 1970’s and 80’s, and Takeda Castle has regained its well-deserved position as a mountain-top wonder - and one of the largest ‘complete stone wall remains’ in Japan.
After you see Takeda Castle on its ‘sea of clouds’ at dawn, you can descend the neighboring mountain and cross over to hike up to the castle ruins themselves. Close to Takeda rail station, you’ll see a number of temples; they were originally part of the castle’s first line of defence.
Climb to the castle itself and you’ll find a central fortress, with three wings extending from it. A one-way visitor trail takes you throughout the castle, and you can also explore the castle grounds, with their own magnificent viewpoints over the mountain range and the town in the valley beyond.
Late autumn is one of the best times to visit Japan after the sweltering heat of the summer subsides, and autumn colors on trees in Japan’s parks, temple grounds and mountain sides are celebrated. Fall also creates the perfect conditions of cool overnight air meeting warmer water in the river in the valley below Takeda Castle to generate the fog that forms into its ‘sea of clouds’. Fair warning though – the phenomenon doesn’t happen every day. 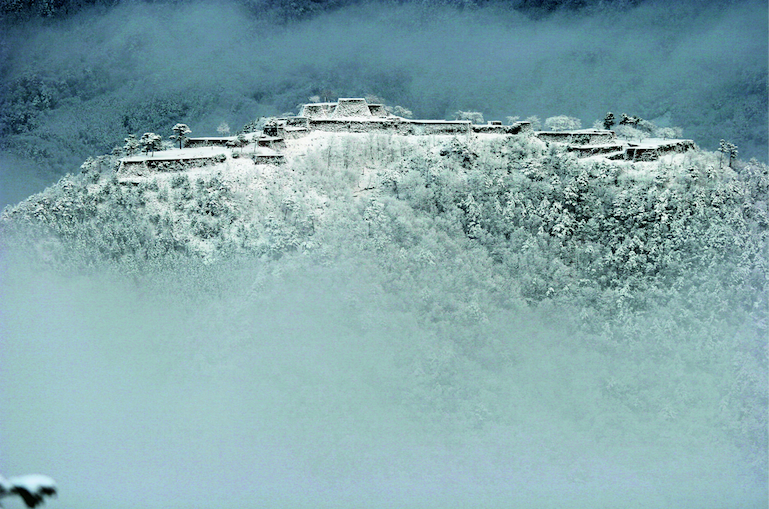 Nonetheless, Takeda Castle is a magnificent site at any time of the year: a cool, mountain air escape from the summer heat, a destination for Japan’s most renowned early spring ritual of cherry blossom viewing, and possibly its most mystical after a winter snow. There’s a nearby, natural hot spring town called Kinosaki Onsen, where a traditional Japanese hot spring bath will ease any hiking aches - and warm you up in the winter.
I can recommend combining an off-the-beaten-path visit to Takeda Castle with a visit to nearby, 17th century Himeji Castle (below). Still standing intact the midst of the city of Himeji – also in Hyogo Prefecture - Himeji Castle is considered the finest example remaining of iconic Japanese castle architecture from the feudal period. With its blindingly white exterior and outstretched ‘winged’ appearance of curved, tiled rooftops, it’s often compared with a bird taking flight. There, you’ll be able to walk through the castle buildings, which helps bring historic Japan to life in your imagination. 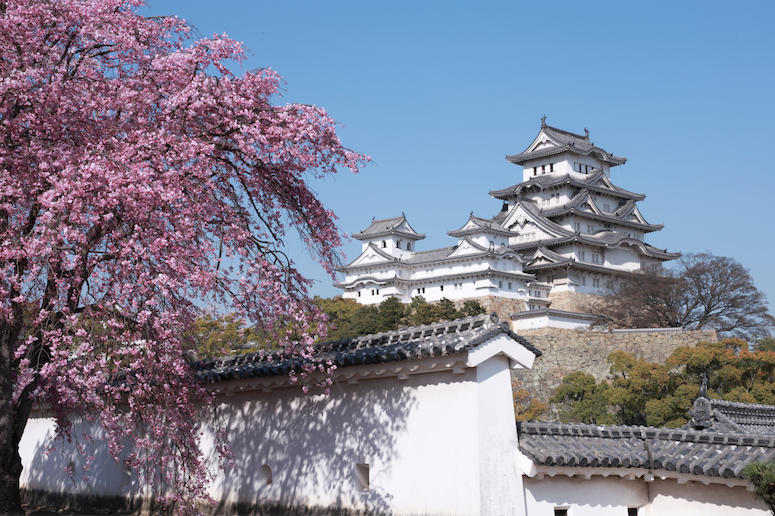 By: Lynn Elmhirst, Producer/ Host, BestTrip TV
All Photos of Takeda Castle: Toshie Yoshida / Asago City Tourism
Himeji Castle Photo: Getty
Copyright BestTrip.TV/Influence Entertainment Group Inc or Rights Holder. All rights reserved. You are welcome to share this material from this page, but it may not be published, broadcast, rewritten or redistributed.